(White Throated Kingfisher with a grasshopper)

Area: All India, south of Himalayas. 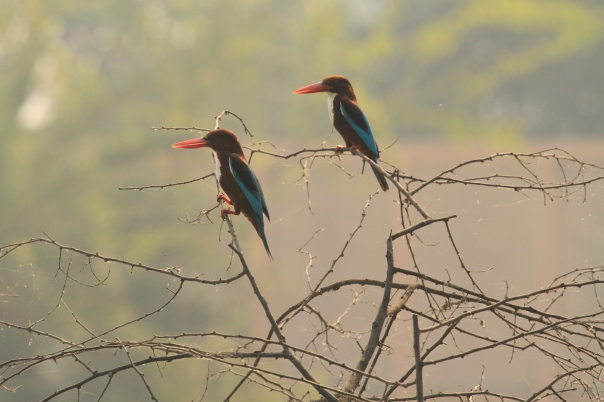 My two words: It is the most common Kingfisher of India. It is a brown bird with turquoise-blue wings and of course, a white breast. It has a white wing-patch which can be seen clearly during the flight. The legs and beak are red.

Both the sexes are similar in appearance.

Solitary or in pairs. They are one such examples of species of Kingfishers which can survive away from water. Simply, they can live without fish.

They are quite common in India. One can see them anywhere. In places where forest cover is less, they take to overhead wires and other open spaces. They sit high above the ground and wait for the prey to come in its hitting zone and then drop suddenly and usually come up victorious.

They breed during Monsoons. Their nests are tunnels made out on mud walls. They usually lay 4-5 eggs which are white in colour. They take roughly a month to hatch. Fledging of chicks takes 2-3 weeks.

Their range is increasing over time and are their Conservation Status according to IUCN is LC-Least Concern.