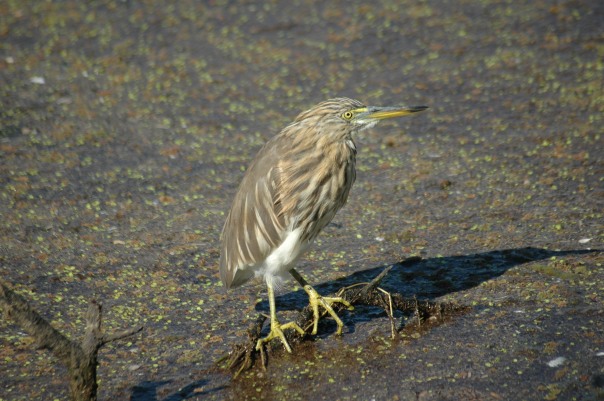 Size(44-45cm): It is a small Heron almost the same size as that of the Little Heron.

Area: This specific species of Heron can be found anywhere around India. Ranging from dry areas of Rajasthan to the wettest place on Earth-Mawsynram, you can find it anywhere in India.

My two words: Indian Pond Herons are brown in colour. They have white underparts and chin. The back is buff-brown and shoulders. The head, neck and breast are streaked with dark brown.

During the breeding season, the streaks disappear and the buff-brown back becomes rich maroon. The streaked breast and head changes to un-streaked buff-brown. The yellow bill becomes bluish at the base and black at the tip.

It usually sits whole day on the side of the water in wait of the prey and wait for it to come more closer. Indian Pond Heron is most common Heron in India but one can have a difficulty spotting when it sits still at the edge of the water body.

The still-sitting bird may appear boring but the scenario when the sitting bird suddenly takes off for a short flight. When the bird flies, its wings which appear to be brown while it stands still appear to magically change colour and become white.

(Indian Pond Heron with its prey)

Solitary or in parties. They usually prefer hunting alone but might be seen hunting in small groups.

The male has the duty of bringing the material required to make the nest. The nest is built by the female high atop a tree. They lay 3-5 eggs which take about a month to hatch.

They diet chiefly consists of fish but they also feed on crustaceans, amphibians and other small insects.